The Saviour is available to watch on demand as part of Edinburgh Festival Fringe from 6 – 30 August, 2021 as part of Assembly’s digital season, supported by Culture Ireland.

‘rare and joyful … ambitious and emotionally complex piece’
★★★★ The Stage

★★★★ ‘the performances are flawless’
Irish Mail on Sunday

There’s a new man in Máire’s life. But some people aren’t happy.

On the morning of her 67th birthday, Máire sits up in bed enjoying a cigarette. There’s a man downstairs. She is blooming. Deirdre Kinahan’s fierce and funny play features ‘blazing performances‘ (Irish Times) from Marie Mullen and Brian Gleeson. The Saviour charts an extraordinary shift in Ireland’s social, political and religious life, asking questions about responsibility, how we respond to trauma and the tricky question of forgiveness.

Directed by Louise Lowe and starring Marie Mullen and Brian Gleeson, Deirdre Kinahan’s fierce, funny and profound new play was first broadcast from The Everyman on 19 and 20 June, 2021 as part of Cork Midsummer Festival 2021.

Supported by the Arts Council through an Arts Grant Funding award, its presentation at Edinburgh Festival Fringe is supported by Culture Ireland.

Captioned Performance and Audio Description
A captioned (subtitled) performance is available to watch on demand. An audio described introduction Is available here and a downloadable transcript is here. For patrons who are visually impaired, this Audio Described Introduction serves as a spoken programme. 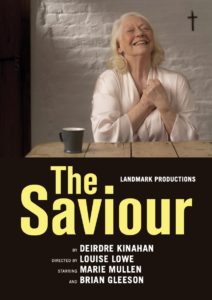